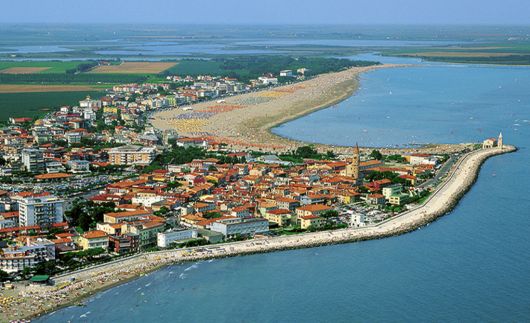 Situated between Venice and Trieste, Caorle and its 15 kilometres of fine sand, offers both striking beauty and a wide range of accommodation to satisfy every need. The old town of Caorle with its quaint fishing village, has remained unchanged over the ages. The Byzantine Romanesque cathedral and its monumental cylindrical bell tower is the symbol of an enduring ancient tradition.

Caorle’s origins go back to the Roman era, as the numerous archaeological findings in town and in the surroundings testify. The town gained importance for the vicinity to Roman centre of Concordia, of which it became the closest sea port, connected by the river Lemene. Later, Caorle grew in size as a consequence of the Barbarian Invasions– as it also occurred in Rialto (Venice) a few decades later. This forced Concordia’s people to flee and seek refuge along the shore, in areas protected by the sea and the swamps. Since then, the link between Caorle and the other coastal towns, in particular Venice, is binding and Caorle in fact shares the historical vicissitudes of the Serenissima, though, for centuries, Caorle’s economy has been based primarily on fishing. 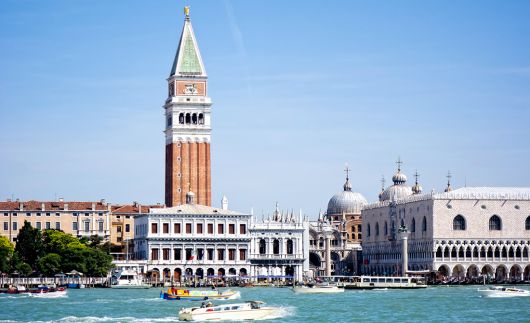 Venice and its history

The beach of Caorle winds on 18 kilometers of fine golden sand, starting from the Levante beach to meet that of Ponente, both adjacent to the old town, continues with the beach of Porto S.Margherita, with a nautical vocation and closes with the of Duna Verde, city garden.
It offers a wide choice of bathing establishments, most of them equipped with beach volleyball courts and bocce on sand.
On all the beaches are organized games for children, beach volleyball and bowls tournaments and surf courses. All hotels have a private beach, equipped with umbrellas, sunbeds and cabins, included in the price. 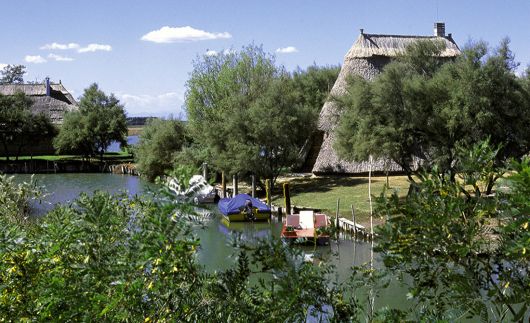 In the lagoons, on the banks of the rivers or in the land, the Casoni have represented for centuries the home, the village or the shelter for the inhabitants of Veneto: farmers, fishermen, hunters or wandering people. Sails of straw and straight reeds on the edges where water and land meet each other, along the misty borders of the low tide, over the sandbank of the inner lagoons, in the marshy clearings of the hills. For centuries, the “casoni” have repeated the original form of the paleohistorical structure, with variations, which are only due to the variety of the incidental functions and to the quality of the building materials, which are available here: wood, straw, sedge, and clay.

The radical transformations, which have been realized in this region, above all during the last century, cancelled them from the daily landscape and they removed them from our memory: few well-kept examples and few ruins integrated in new buildings remain nowadays in the country. The “casone” are rarer along the coasts of the rivers and in the inner marshes, which were harnessed as hydroelectric power stations or as irrigation systems, asphalted or parcelled out.

They still exist in the lagoons or in the fishing valleys of the Oriental part of Veneto, in Venice’s province, in the municipal districts of Caorle and San Michele al Tagliamento.
That is to say in a land of rivers, canals and stretches of water which, even if it was reduced and affected by a century of hydraulic and agricultural drainages, was able to maintain its own particular and very delicate nature up until today.

The very ancient constructive technique of the ““casoni” of lagoon or valley that are situated on the edge of canals, rivers or on isolated muds, (sope) announces the principles of the fondamenta of Venice. The “casone” was a permanent but also a seasonal habitation, in according to the ages, and nowadays it is the place of the identity for the local populations. 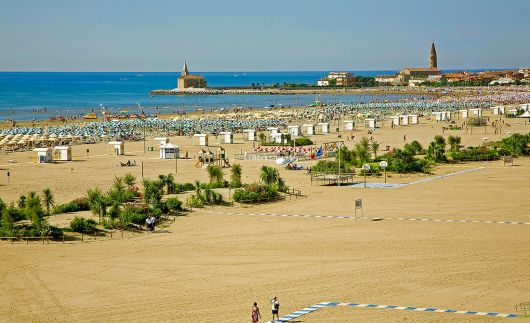 In the Caorle's centre the beach is divided into the East and the West side called Levante and Ponente. Between them there are the famous cliff sculptures, named Scogliera Viva. The beach carries on with the area of Porto S.Margherita, the holiday resorts Prà delle Torri and S. Francesco, Duna Verde and the most recent Altanea. While going toward Trieste, beyond the Falconera's mouth, there is the famous natural wild beach of Vallevecchia.